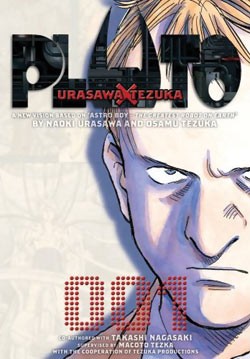 This is not your father’s Astro Boy.

It took one man to change the face of manga forever and that man is Osamu Tezuka and back in the day his Astro Boy series took an interesting turn in a story arc known as “The Greatest Robot on Earth.” It was not only a great Astro (or Atom, if you prefer our favorite robotic boy’s true Japanese name) tale but inspired many future manga authors like the great Naoki Urasawa. It is none other than Urasawa who proposed to take Tezuka’s revolutionary story arc and comes up with Volume 1 of Pluto: Urasawa X Tezuka … a true manga masterpiece.

Then again it might not come as a surprise that this title is good enough to be considered a masterpiece thanks to Naoki Urasawa’s list of accomplishments that include brilliant titles like Monster as well as 20th Century Boys. Like most of his work, he can hook you into his story effortlessly and the same can be said about Pluto as it introduces familiar characters in new and impressive ways.

Urasawa paints an intriguing picture of a future where humans and robots coexist peacefully to the point that even the robots that don’t look like humans are accepted in society. As it turns out, one of the world’s most loved robots – named Mont Blanc – is beloved throughout Switzerland and all throughout the world. He’s also one of the most powerful robots created. So, during a fire in Switzerland’s forest, Mont Blanc’s dismantled body is discovered and it’s a shocking scene to be sure and even more so when they discover that the one responsible set the body up to look like the head had horns.

Europol sends investigator Gesicht to look into the matter and, at first glance, he seems to be the workaholic type who worries even his wife. As it turns out, and I’m not spoiling anything by revealing this (especially those who already know the character), Gesicht is a robot himself who just happens to look and respond like a human. Gesicht is quickly called to Dusseldorf on another murder that he’s told might be connected. Interestingly enough, the murder seems to be of a human whose body was adorned with makeshift horns just like Mont Blanc’s body. A connection is quickly made concerning this man’s identity as well as his interest in robots.

Suddenly, he the police report that a police officer and his robotic partner have been assaulted by a man wielding a pipe. Gesicht finds that the officer is alright but his robot partner has been smashed to pieces. He gives chase and confronts the assailant. Gesicht is the kind of robot who does his job well but has a human-like compassion as he notifies the robot officer’s wife of what happened. When he decides to take her husband’s memory chip to her to remember him by she inserts it into her memory and sees exactly what her husband saw before he was destroyed. Just before the officer’s demise, something caught his eye and it seemed to be leap from building to building. Is the murder of the human and Mont Blanc the same figure?

The mystery becomes more complicated since no normal human could just from building rooftops like that and the killer being a robot seems impossible seeing as robots follow a certain protocol that keeps them from harming a human. Gesicht turns for help from an unexpected source just to find out and that source is the only robot known on Earth to have killed a human. What it tells Gesicht is startling but makes a lot of sense. Somebody or something is targeting the most powerful robots on Earth and, of course, Mont Blanc was on that list and so was Gesicht.

In Scotland, a famous music composer for motion pictures is crankily awaiting the arrival of a new butler. It seems that Paul Duncan has fired just about every butler and, despite the fact that he is blind, he’s quick to judge people enough to notice their flaws. His newest butler is named North No. 2, a strange-looking robot who wears a robe. North knows his new employer’s work and seems to enjoy the melodies of his work but Duncan is so bitter that he makes it clear that he doesn’t care about the opinions of a robot that was designed for war.

Oddly enough, North loves music to the point that he plays with his employer’s piano in hopes to learn how to play it but Duncan is not the kind of encourages and becomes enraged by the fact that a machine wants to learn to play music. Despite the old man’s fits of rage, North falls in love with the man’s music and a song he sings at night in his sleep. At one point, Duncan fires North but the robot comes back with a bit of information that changes everything.

You see, Duncan felt abandoned by his mother at a young age when his mother – penniless – turned to a rich man and sent her only son to a boarding school. Duncan was hurt by this and became bitter as his illness took his eye sight permanently. This didn’t stop him from succeeding in the music business but he still held that grudge against his mother … until North tells him the truth. It’s a beautiful and heartbreaking moment to say the least.

Just as things were changing for the better between Duncan and North, the robot notices a strange and dangerous presence coming their way. The robot takes to the skies just as it did many times when North was a soldier and the end result is tragic. It is Gesicht who learns what happened and quickly sees to the other possible candidates for the killer that includes a robot fighter called Brando who happens to look human. Brando, as it turns out, is a family man with adopted human children. He doesn’t seem worried when Gesicht tells him that he might be the killer’s next target.

Brando isn’t the only one Gesicht isn’t worried about as he finds the next candidate … a boy who cheerfully picks up a snail to inspect it then places it gently back on a leaf. Gesicht asks the boy a question.

I don’t know about you, Astro Boy fans, but this is the moment that would make any geek smile.

Volume 1 of Pluto: Urasawa X Tezuka is exactly what you might expect from a master like Urasawa and he will certainly not fail to blow you mind. This is the kind of work that you can come to expect from this author and a brilliant first volume that has it all to the point that you will be hooked by the very first chapter. You need to buy this manga right away.

STORY: A+
When the world’s most beloved and powerful robot is destroyed by an unknown force, Interpol sends a robot investigator named Gesicht to look into the matter. When the body of a human is discovered in the same fashion as the robot, Gesicht begins to suspect that anyone connected to powerful robots might be the killer’s next target and that includes a war machine, a famous robot fighter and a robotic boy.

ART: A+
Naoki Urasawa’s art has always been consistently gorgeous throughout his career whether it’s his character designs or lovely backgrounds. Besides that, he knows how to set a scene up beautifully to the point that he makes you feel the emotions of his character without even resorting to a word balloon.

OVERALL: A+
Another achievement in a list of monumental titles that can only come from a true master of his craft, Urasawa takes a beloved work of art and makes it even more compelling with Volume 1 of Pluto: Urasawa X Tezuka. Everything you know about Astro Boy or “The Greatest Robot on Earth” is about to change with this series and change in the best way possible.